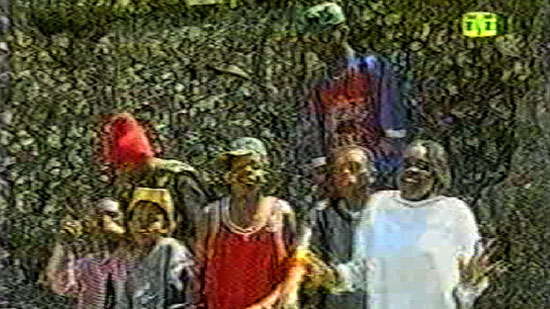 The digital revolution caught up fast in the world of African hip hop! Less than ten years ago, a DVD player was still an uncommon sight in a place like Tanzania, people were just getting used to VCD’s and most hip hop videos were still only released to television stations with a few VHS compilations distributed via the Indian-Tanzanian music distribution network which otherwise was still big on music cassettes.

If we put the clock back a few more years to 1997 and take the ferry from Dar es Salaam to the island of Unguja (Zanzibar), local hip hop was mostly centered around a few individuals who all knew each other. There was no music industry to speak of, so the only rap recordings from those days were the live recordings of the ‘Mabishoo’ tape that was all taped on the sound system of Fuji Disco (Bububu, north of Zanzibar town) and a few more home-made albums like a cassette by Kim Pekee, one half of the duo behind ‘Mabishoo’.

Another guy involved with those recordings was Cool Para, who after a first rap effort went on to form his own rap group called Struggling Islanders together with Cool Muza, Haji and female emcees SJ & Aunt Suria. They got some funding from the ministry of education to go to the mainland to Soundcrafters studio and record ‘Historia’, a song about the beautiful history of post-revolution Zanzibar and a string of other tunes, which together made up their first album. The cassette was the first release on Rumba-Kali records which again was the first step towards setting up Africanhiphop.com which at the time was called Rumba-Kali home of African hip hop.

Old tapes from TVZ
Fifteen years is a long time in Zanzibar and memories have become covered with a bit of dust. Also there are no local video archives to speak of but luckily we kept an old VHS recorded off tv (TVZ, the islands’ only tv station which one time in the 1970’s had been the first color TV in all of Africa!) and on there we found a couple of Zanzibar hip hop videos, not in great shape but enjoyable. TVZ had a habit of producing music videos, at the time often set in front of a blue screen for projecting video images in the back, but in the case of ‘Historia’ some scenes were recorded at locations of historic significance such as the Maruhubi ruins and Ngome Kongwe, the old Omani/Portuguese fort in town.

Watch Struggling Islanders’ Historia along with solo joints by Cool Para and SJ, as well as an unseen (even the group had never seen this edit) music video for Tanzanian all-time hip hop classic ‘Msafiri’ by Kwanza Unit! The latter is remembered as one of the pioneering groups in Tanzanian hip hop, and ‘Msafiri’ is based on a loop by a King Kiki song; it was featured on Kwanza Unit’s third album ‘Kwanzanians’. They came to perform in Zanzibar and while out there were offered by TVZ to record a music video for their hit. This is also one of the rare sightings of late group member D-Rob who many still remember as one of the finest Swahili emcees of the era.

Where are they now?
So what happened to all these bright talents of that era? Some of them tried hard but didn’t get enough incentive to keep rapping. Zanzibar, despite its exotic image and growing touristic appeal, is a tough place to grow up and make a living. Making music is not a preferred choice of career and because of religious and cultural reasons some people frown upon musical performance altogether. SJ and Aunt Suria both got married and quit rapping, though SJ picked up the mic after a divorce. Cool Para stayed active in music, released a handful of cassettes and VHS-es and still makes a living as a dj playing in local clubs and resorts. Cool Muza quit rapping but made a come-back recently, and as we speak he is back in the studio with Cool Para.

Kwanza Unit never formally disbanded but the group members went their own way, while some of them are still actively involved in hip hop to this day. Meanwhile in Zanzibar, there’s a whole new wave of local rap, some of these groups have even had success on the mainland (Berry Black, Offside Trick) but the old school hasn’t really received due credit yet.