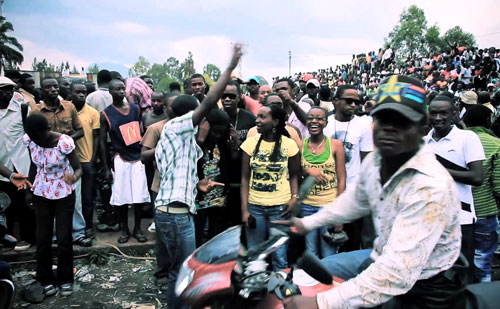 30 June 2011: DR Congo celebrates its 51st Independence Day, and a collective of rappers and singers from Eastern Congo launches their new track and video ‘Saisir l’avenir’ (Seize the future). The song and video were produced last year November during SKIFF (Salaam Kivu International Film Festival), a one-of-a-kind cultural event in the border town of Goma that celebrated its fifth anniversary in 2010.

Although there are many local artists and even a couple of recording studios in Goma, ‘Saisir l’avenir’ is the first hip hop video from this part of the world to be presented to an international audience: until recently, the war situation had most of Congo’s Kivu district isolated from the region and even from the western part of Congo. Even the most well known hip hop artist in Goma hasn’t managed to record a video and have it played on national TV.
[youtube]http://www.youtube.com/watch?v=2K6QIZp2a6U[/youtube]

The eastern part of the Democratic Republic of Congo has been in the news a lot in recent years, but the updates in western media about regions like northern and southern Kivu are rarely positive. And while there is continuous fighting, violation of human rights and exploitation going in some parts of eastern Congo, many eastern Congolese are living their lives in peace today. The city of Goma, which was still under siege of general Nkunda’s army in 2008, has returned to its everyday affairs and even the lava that buried a large part of the city in the 2003 eruption of nearby volcano Nyiragongo has been covered with houses, from the wooden shacks in ‘Volcano city’ to the prefab villas near the lake. 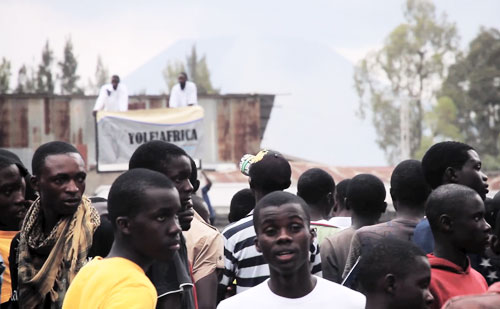 SKIFF: the festival at the foot of the Nyiragongo volcano
Salaam Kivu International Film Festival (SKIFF) has been very active in providing a stage for local and international film, dance and music in a city that is still visibly affected by years of fighting and a lack of infrastructure investment by the national government. Set in the city of Goma at the foot of the active volcano Nyiragongo (its red glow can be seen all across town after sunset), the festival is organized by Yole!Africa, a youth organization based in Kampala (Uganda) and Goma, run by Congolese film director Petna Ndaliko Katondolo and his young multi-ethnic team.

With very limited funds and avoiding the constraints of certain NGO-funding they have managed to set up a festival that in 2010 lasted for 10 days, attracted over 6000 local youth during its final event and programmed films, musicians and dancers from the entire Eastern African region and beyond. Like the Yole!Africa center in Goma city, the festival is open to everyone and indeed the crowd is a harmonious mix of everything from school children, university students, street kids, artists, older music fans and the occasional NGO employee (Goma is the capital of NGO activity in the eastern Congo region, and the UN has a big base there, too). Click here to download the 2010 program (PDF brochure).

An important aspect of SKIFF is the educational program. Yole!Africa rents a rocky plot – in the middle of where the 2003 lava stream demolished the old city center – with a house built on it, which hosts the Y!A community center. During SKIFF the garden and house are full of Yole members – youth from about 10 to 25 years of age who come to watch films, practice for the dance, rap and singing competitions, and participate in workshops. The ‘Saisir l’Avenir’ video is the result of two workshops: a series of music production classes coordinated by Zimbabwean born, US based musician Kundayi Musinami, and a music video workshop by Africanhiphop.com editor J4 from the Netherlands. 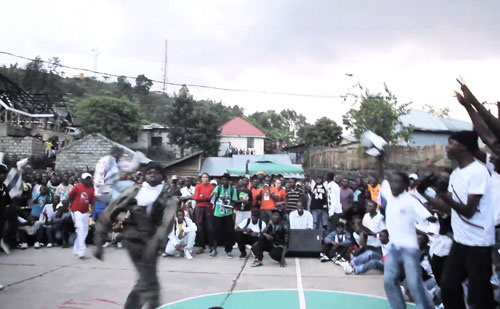 Saisir l’avenir: seize the future
During the course of the festival, a group of twelve local artists (all singers and rappers) were selected from a talent competition run at the Yole!Africa center.
Together with ten young aspiring video directors, the artists worked together in composing, recording, scripting, directing and shooting the song and video. The outcome is a work that is symbolic for the positive, forward looking and reconciling role that SKIFF, and culture in general, plays in the post conflict zone of eastern Congo. The song lyrics in three languages (French, Congolese Swahili and the Rwandan language Kinyarwanda) talk about how the new generation has confidence in a peaceful future, about the need to put an end to cultural and economic differences and join to harvest the fruits of the valuable Congolese soil. 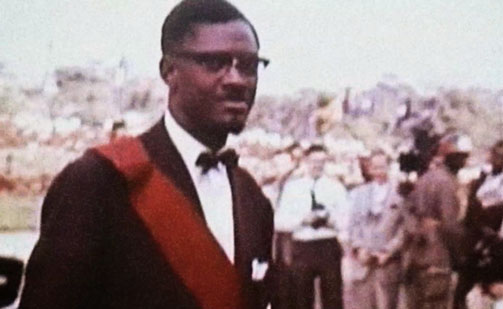 The intro to the song and video are a homage to the famous Independence Day speech by Lumumba (pictured above), one of the visionaries of Congo’s early days as an independent nation. His courage to speak out in the presence of the King of Belgium about the negative effects of colonization, and his critical attitude towards post colonial exploitation by western powers, contributed to the conspiracy (with the involvement of local politicians including later president Mobutu and even the CIA) that captured and killed him in 1961. 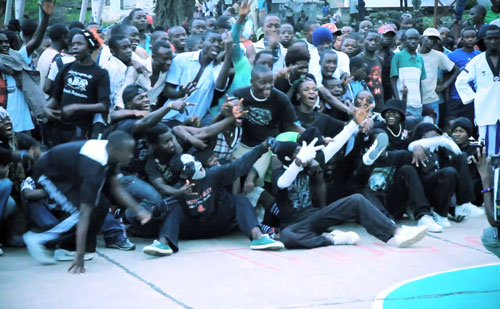 Dance competition
Most of the vocalists featured in ‘Saisir l’Avenir’ had never been inside a recording studio, and some of the young camera men had never operated a camera in their life. The ‘studio’ during the festival was set up using a laptop, an external soundcard and a mic – mostly powered by a buzzing generator, because eletricity supply in Goma is still erratic. The entire video was shot with a hand held Canon camera during the closing day of the festival at Cercle Sportif, a sports ground which hosted a 6000 strong audience who came to watch the festival’s dance competition finals and performances by the festival’s invited performers. Two of Congo’s biggest hip hop stars, Lexxus Legal from Kinshasa and Alesh from Kisangani, did a show, they are also featuring in the video along with spoken word artist Ndungi Githuku who is a regular contributor to SKIFF.

The dancers, emcees and singers in the video are just the tip of the iceberg of an enormous pool of talent growing up in the eastern Congo right now. So far the most visible young artist from Goma has been Innocent Balume, who developed his talents at Yole!Africa and went on to perform a Michael Jackson cover on a national talent show in which he was picked as a winner – he is now the face of mobile operator Vodacom and has recently performed in Zimbabwe where he met Akon and then the USA. Meanwhile, Yole!Africa is preparing for the next edition of SKIFF which will happen this autumn in Goma.