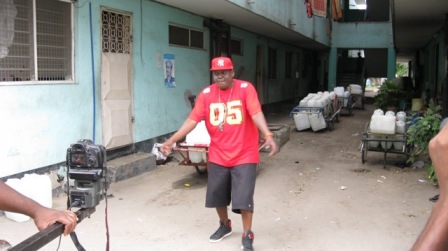 One of Tanzania’s hip hop heavyweights, Professor Jay is back with a new video and single. In anticipation of a new full album that will drop soon, ‘Kama ipo’ seems a strong comeback after three years of relative silence, which saw Prof Jay touring all across Tanzania and the world without dropping new music. The single was produced by Lamar (Fishcrab production, easily recognized from the trademark jingle preceding many of his hits) and the video bears the signature of Adam Juma. From Hardblasters to this latest single, Professor Jay now has over 15 years in the game but he doesn’t show signs of wanting to retire.
In other Tanzanian hip hop news, Gangwe Mobb – who scored many hits between the late 90s and 2003 until they disbanded and Inspekta Harun went solo – are now back together and have a new album coming up! Then, X Plastaz from Arusha are also back in the studio to work on tracks for the follow-up to their debut ‘Maasai hip hop’ while JCB just released a new single after his award winning ‘Ukisikia paah’. Are we witnessing a resurrection of the 90’s spirit of Tanzanian hip hop? Check out Bongo Star Link to listen to some recent TZ hip hop tunes.