African hip hop radio has reached another milestone in its existence. The show has been around almost as long as Africanhiphop.com itself; we did our first ‘show’ from an attic room – Maluka and J4 behind the minidisc deck with a cheap mic and a dj mixer. The stream was uploaded by a 56k modem via a phone line, and at some point we had people tuning in from different European countries. Seven years later, in 2005, we took it to a real radio studio, using the facilities of VPRO for whom we also did a weekly show focusing on a wide range of music, including African, Brazilian, the new sounds of broken beat and grime and more. 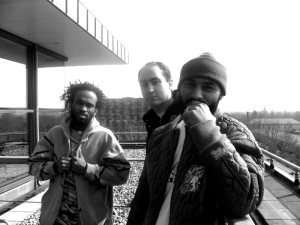 African hip hop radio had contributors’ shows from all over the world, and presenters included Wanlov (Ghana), Lee Kasumba (SA), Karim from Arabian Knightz (Egypt) and many more. Between 2008 and 2010 we ran a weekly broadcast on Holland’s popular youth radio station FunX (Lijn5) hosted by GMB, J4 and dj Threesixty, and from 2011 after program changes at FunX we found a new host at the uniquely located Red Light Radio in Amsterdam’s red light district, where we have been doing a monthly two-hour set ever since.

This month we’re in for some changes though! As you may have seen, we are beta testing a new, non-stop stream playing African hip hop around the clock. No need to tune in at a set time or wait for on-demand streams; this is the only place on the web where you can listen to a non-stop stream of 100% hip hop from all across the African continent and diaspora. For now available as a pop-up player (see the sidebar to the right of this story), we’re also planning to make it available as a mobile app. And we’re adding new songs all the time, so if you think you heard it all, check back in a few days.

The monthly show on Red Light Radio, presented by Amal and J4, won’t disappear but it will be rebranded. Under its new name ‘Africa Is Hot’ it will stay true to the makers’ roots in digging up fresh and unheard sounds, while it will expand its horizons to play music from across the board. Expect hip hop but also the more innovative afrobeats tunes, afro house, old school African funk and afrobeat and other styles that can’t be labeled into categories. Each montly show will also be published here, and you can follow the show on Twitter via @africaishot.

Then, as we were behind on updates – while working behind the scenes on the website design overhaul – here are no less than three fresh African hip hop radio shows. From April there’s J4’s Minidisc Special, two hours of tunes played from the antique medium of minidisc. Back in the mid to late 90s, minidisc was the affordable method of digital recording, and many of the exclusive hip hop tunes we got from Tanzania, Senegal and South Africa in those days we got on minidisc – it’s safe to say that we were the first in Tanzania to record using the medium.

The May show featured a phone interview with (ex presenter) Gery Mendes aka GMB who spoke about his new, second album Caminho (see the cover photo above this article). And in the June show we were joined by US born dj Lynnee Denise who brought a crateful of kwaito and Afro house. Enjoy… six hours African hip hop radio!