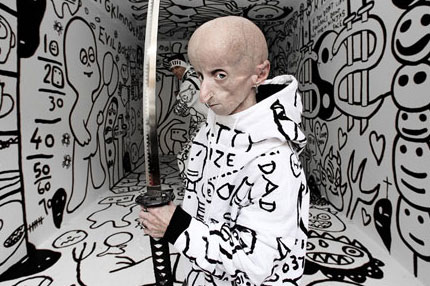 Salute to South African hip hop pioneer Leon Botha, also known as dj $olarize. Leon passed away on the 5th of June from complications arising from progeria, the rare condition which he had lived with since birth. We first came to know Leon as a visual artist whose paintings were inspired by hip hop cover art. In 2007 we featured his work in an online exhibition which can be viewed here.

In recent times, Leon joined forces with Die Antwoord, the Cape Town based hip hop crew who became an overnight success after their album and videos became a viral success on the web. Using his dj name $olarize he was seen in ‘Enter the ninja’, which gained him a whole new fan base around the world.

Last year, the photo exhibition ‘Who Am I? Transgressions’ in which South African photographer depicted Leon in a surrealist landscape was shown in South Africa, Holland and Germany.

While Leon had been battling with his disease for long – he was one of the oldest survivors of progeria – his health deteriorated after he suffered a stroke in November. Leon died on 5 June, a day after his 26th birthday.