Yasiin Bey, the travellin man in Nairobi and Zanzibar 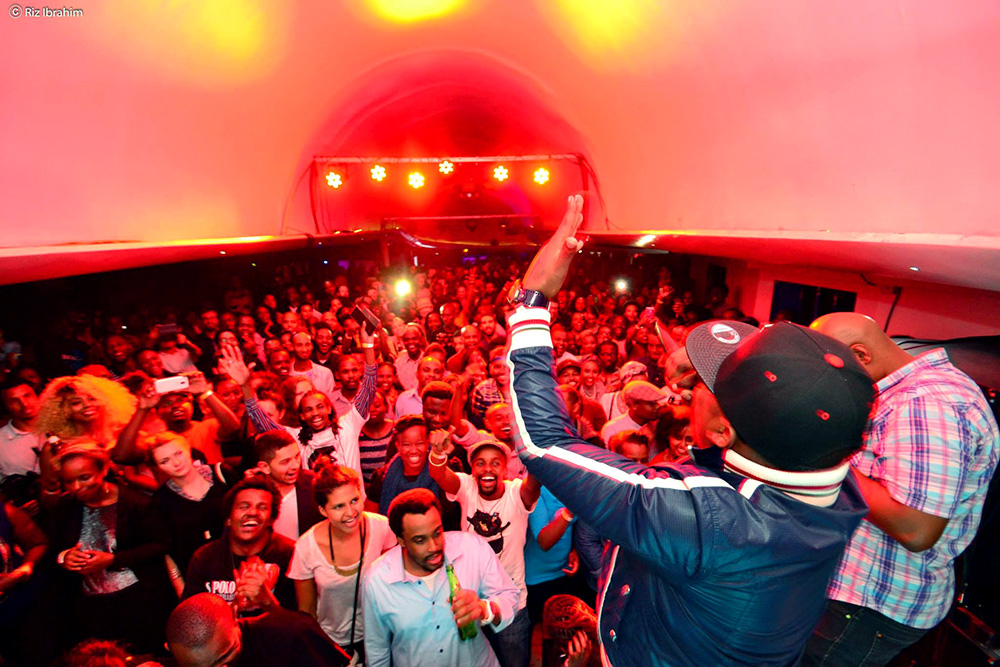 The original travellin man, Yasiin Bey – formerly known as Mos Def – has been frequenting the Motherland for years, but his recent move to Cape Town, initiated when he visited in 2013, was much discussed on the web. In a handful of interviews (see MG and Beats by Dre), Yasiin explained what inspired him to spend more time in Africa – and denied that legal issues had anything to do with his move. Apart from working in South Africa, Yasiin was also seen at ARCH, a creative meeting organized by the African Union in Addis Abeba (Ethiopia) in May 2014, along with 100 other Africa based creatives. At that meeting he hung out with Moses Mbasu (Buddha Blaze), the Kenyan writer, marketeer and music promoter well known for having organized the legendary WAPI events in Nairobi, and more recently for working with Coke Studio Africa and organizing weekly hip hop events under the Nairobi Hip Hop Rapsody banner.

It was only a matter of time for Yasiin to come and perform in Nairobi, but it still took a year to organize his performance on May 28th, navigating schedules and postponing because of terrorist attacks. In the meantime, in October last year Yasiin’s former artistic partner in Black Star, Talib Kweli, came to rock Nairobi Hip Hop Rapsody to a sold-out house in the Ebony Lounge (capacity 1000) – watch a video here. Tickets for Yasiin’s show in the same venue were not cheap at Ksh 5000, about 50$. As Buddha Blaze said, bringing out an artist of the Yasiin Bey caliber for a one-off gig costs a lot, but there is a growing audience in Nairobi who’s ready to pay to see good live music. The event certainly created a buzz in town, and besides reaching his core fans it also attracted a number of people who may not even know much of Yasiin’s recent work, or care too much about the thoughtful, conscious stream of hip hop that Yasiin represents since his Mos Def / Black Star days.

The night kicked off with a revue of solid local artists including Wangechi – her first show after she got wounded in a bad car accident last year, Bamboo who reunited with Abbas for a K-South performance, and King Kaka (Rabbit). By the time Yasiin got on stage it was way past midnight, but with a four-hour performance he did give the crowd what they paid for. Kenyan audiences may have certain expectations of what a (foreign) rap show is supposed to be structured like, but Yasiin is known for making his own plans on stage, with the constant factor being his red mic which he carries around the world. The day after the show, there was some discussion on Twitter with a couple of ‘see I told you’ people laughing about how people dropped 5000 Ksh for this night for what they considered an off-center performance. As Buddha Blaze explains: “His show is eccentric Yasiin Bey. His core fans loved it. Wannabee hip hop heads got lost in the way. There’s a huge audience people were dancing till morning”.

Nairobi Hip Hop Rapsody is going strong every week; the other day Tanzanian rapper Fid Q – who was in Nairobi to record his contribution to the new Coke Studio Africa – did a presentation of his forthcoming album, and the hip hop night often has local artists and deejays performing. Future bookings include Jay Z’s DJ – Young Guru in July, and Blaze is working on getting Redman, Pete Rock and more out.

And the Travellin Man? He traveled the next day, off to Zanzibar with his dj Samira Bin Sharifu (Netherlands/Zanzibar/UK) to explore the coastal Swahili culture. We met up with Yasiin at Zanzibar town’s Mercury restaurant overlooking the Indian Ocean, and witnessed a man who felt right at home in East Africa, both the bustling creativity of Nairobi and the serene beauty of Zanzibar. His encounter with Erykah Badu later that week, who had come to Zanzibar for a photo shoot, is another indication that East Africa is becoming less isolated from what’s happening in the rest of the music world. And we have more than a hunch that Yasiin Bey will be back in Kenya and Tanzania sooner than you might think.