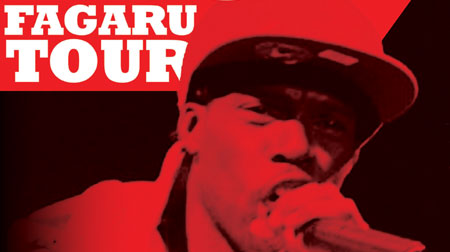 One of the pioneers of the Senegalese underground hip hop sound, Matador of Wa Bmg 44 aka Xarale aka Suspekt Numéro 1 is back in Dakar from attending WOMEX (World Music Expo) that took place in Copenhagen (Denmark) in October. Back in Senegal he ventured on his Xippil Xol Fagarou Tour which kicked off November 11th in Thiaroye-Senegal, and shortly after he released the new video ‘Catastrophe’.

Matador is well known in the Hip-Hop movement in Senegal for his social and political engagement. During the  Xippil Xol Fagarou Tour he aims to raise public awareness on HIV/AIDS prevention. Matador is joined on stage by Simon, Fou Malade, Tigrim Bi, Wa Keur Gui, Syndikate 21, 5Kiem Underground, Sen Kumpe, Alien Zik, La Section B, One X and other artists.

Also last month Matador released his new music video in support of the Senegalese population impacted by the recent floods. The song ‘Catastrophe’ was recorded over a beat by our own African hip hop radio dj Threesixty.

The tour is sponsored by Africanculturban as well as communication agency Africart and ADEMAS (Agency for the development of social marketing).

Thanks to JC for the update!