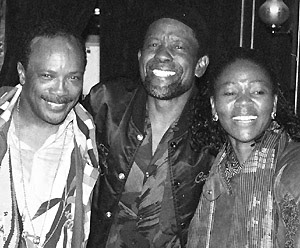 ‘Watch the throne’ is barely out but Jay-Z and Kanye got the world talking about their much awaited collabo, and by now it seems like most people downloaded a leaked copy that was shared on forums and torrent sites. This download included the cd booklet which mentions all the sources of the samples used to craft the beats. One of the samples (in the song ‘Murder to excellence’) was partly credited to South African composer Caiphus Semenya, whose compositions were used in Alex Hayley’s Roots and the soundtrack to the film Color Purple. For his work on the latter he received an Oscar, and now one of the songs on the album has been sampled on a record that’s bound to make it big.
The fineprint in the booklet reads:

The case of Biz Markie vs Gilbert O’Sullivan
The world of sampling is still a bit of a grey zone, exactly twenty years after the infamous court case in which Biz Markie was sued for using a sample of a song by Gilbert O’Sullivan. The outcome of that case had a huge effect on the custom of using samples on hip hop records, as it effectively ruled that for each sample permission should be sought from the copyright owners. After that date in 1991, most of the major labels would restrict sample use, and clear each sample before use. Needless to say, some copyright holders (whether or not they were the original artists who performed the song) would take a tough stance, demanding 100% royalties or a big one-off payment.

Royalties arrangements can get quite complicated though, especially when the work transcends borders. As you can see in the credit statement above, the Semenya composition was used with permission of Warner Brothers, the label that released the Color Purple soundtrack back in 1986. The composition is credited to not just mr Semenya but to six different people including Quincy Jones, and no less than four different music publishing companies. For now we can guess that Warner Bros did not approach each of these copyright holders about possible use of the sample. Back in South Africa, Semenya’s publisher Mike Nswarathle, had not been contacted at all.
Semenya: “This is my work and I should have heard what they are doing with the song and then given them the go ahead if I liked what they were doing.”

Rewards
Does this mean that Semenya will not see any financial reward for his share? If all is well, his rights should be dealt with by the copyright association that he signed up with – whether it’s ASCAP, BMI (both in the USA) or SAMRO in South Africa. However, the process of retrieving due royalties can take months if not years – especially across borders – and a proactive attitude usually helps to speed up things.

What about the actual sample? We listened to the original and the album track but had a hard time recognizing the sample. Some producers tend to chop up samples beyond recognition and in this case they probably could have got away with it, but Roc-A-Fella/Def Jam didn’t take the risk.

And just to get an idea, here’s the album version, but sped up by the uploader (creating a kind of Chipmunk effect!), or Youtube would take it down for copyright reasons:
[youtube]http://www.youtube.com/watch?v=LyGWnOPzyYs[/youtube]