The hip hop generation and elections in Gabon

With the recent passing of Omar Bongo Ondimba, the president who ruled Gabon for all of 42 years, many of the 1,5 million inhabitants of Gabon experienced the presidential vacancy for the first time in their lives. For decades, the president and his network had a stronghold on political life and the local economy, and there’s a chance that their monopoly to power may continue in the years to come. Hip hop plays a remarkable role in the presidential campaign. Omar Bongo’s 50-year old son was recently seen rapping on the main stage of a big hip hop festival.

The country of Gabon is rich in natural resources such as oil, manganese and timber, and with relatively few inhabitants one would expect every Gabonese to share in the country’s wealth. Over the past decades there have been many incidents that have lead to believe that the oil money didn’t benefit everyone in Gabon. The ruling class, in particular the circle of friends, family and others close to Omar Bongo, were accused of having used up much of the income. Towards the end of his life, Omar Bongo was the subject of French criminal investigations into French oil company Elf Aquitaine and the bribes they had paid to Bongo in exchange for access to oil wells, and his bank accounts were frozen.

The wife of Omar’s son Ali, American ex-model Inge Bongo, made headlines back in 2001, as she was renting a place in Los Angeles from P Diddy at 25.000 U$ per month. Inge took Diddy to court, alleging the home was “infested with insects, rodent and vermin”, and claiming that due to a broken door lock, she was forced to enter the house using a dog flap. In addition, death threats aimed at Puffy were dropped in her mailbox.
A couple of years later she was seen in an episode of ‘Really Rich Real Estate’ (2007) as she was shopping for a 25 million dollar home in Beverly Hills. One year later it was reported that she asked for a divorce, accusing her husband of torture and abuse, but NY Post reported yesterday that technically Ali-Ben and Inge are still married though she’s now living on welfare. On her website (under construction), Mrs Bongo also presents herself as an ‘ambassador for the underprivileged people of Gabon and surrounding African regions’. 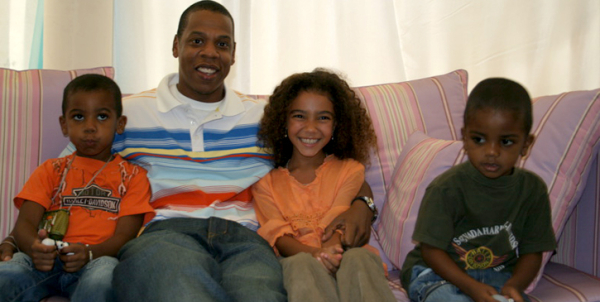 Jay-Z posing with the children of Bongo’s daughter, madame Pascaline – one of the current presidential candidates

Back in Gabon, the death of Bongo recently led to the postponing of two major hip hop events. But hip hop also plays its role in the presidential elections that were hastily rolled out in the past months. Probably the most high-profile out of 20 candidates is Ali-Ben Bongo Ondimba, son of the late Omar Bongo and pop singer Patience Dabany (Omar’s first wife).

On August 30, Ali-Ben represented the ruling party Gabonese Democratic Party (PDG) in the first elections since 1993. Having first joined his father’s government as a minister in 1989, he is a seasoned politician. In his younger years, Ali-Ben spent a lot of time in Congo-Brazzaville, where he was born, and in France. Like his mother, who was an African musical vedette in her own right, Ali-Ben loved music and in 1977, using his former name Alain Bongo, he even released an LP, ‘A brand new man’, produced by James Brown’s former manager Charles Bobbitt and featuring trombonist Fred Wesley (of JB, Parliament and Funkadelic fame), who arranged the songs. Alain and Charles first met when James Brown was flown out to perform at a private party celebrating Omar Bongo’s birthday.

Alain Bongo then recorded the LP in Paris while the music was done in the USA. After the release of ‘A brand new man’, he traveled around West-Africa in a six-week tour with a 30-piece American orchestra, estimated to have cost 150.000 U$. Bobbitt commented: “It’s not the president who’s paying, the son has his own money”. At the time, Alain Bongo was only 18 years old. The tour, billed as ‘Alain Bongo and his American orchestra’, seemed to be about more than just throwing money around though, Alain wanted to show people in Africa that they could succeed in music as well as their American examples.

Listen to the title track from the ‘Brand new man’ lp, sung by Alain Bongo and backed by Fred Wesley’s orchestra:

…and Pascaline herself, down with the Jay.

Most recently, Ali-Ben went shopping for a hip hop act that could support his last minute presidential campaign. A close source tells us that he had well over 100.000 euro to spend on the artists that would co-sign his efforts. To confirm his image of the youthful candidate (‘Le candidat des jeunes’), Ali-Ben went as far as performing a live rap on stage at the Gabao Hip Hop festival in front of an audience of thousands and his act was co-signed by a group of emcees. If he were to win these elections, he may be known as the first rapping president. Take a look at the video:

And the song that was recorded by the artists that were hired to campaign for Bongo:

Earlier this year Lord Ekomy Ndong, known as one half of MovaizHaleine, Gabon’s best selling hip hop act, recorded the track ‘Engongole’ (meaning ‘what a shame’), talking about the past 42 years in Gabon, and the uneven distribution of wealth – 60% of the population is still poor, despite Gabon being one of the wealthiest nations in Africa. The next single called ‘300809’ (30 August 2009) talks about the problems that have plagued democratic elections in many African countries: fraud, predictable results and power monopolies.

Lord Ekomy Ndong: “We want this to change, and we will do what we have to do. We have been asked to take millions and millions of CFA to walking along this or that candidate, but our answer has been: We are there for the people, not for any candidate. We are number one hip hop sellers but we can’t be sold”, adding: “In Africa, hip hop and reggae is the voice of the ghettos. So for us it’s a shame to see notorious emcees selling their skills to fool the street”.

Lord Ekomy Ndong is one of very few artists in Gabon who have stood up to speak up about the political situation. He also called for action, mobilizing people to monitor the voting booths during last week’s election, and created a few short clips (see here, here and here) raising awarenesss among young voters of the importance of this month’s elections.

While voting closed on August 30, the votes are still being counted and final results are expected around the 5th of September. One of the major tasks of any new government will be to look at alternative resources for developing the country as oil resources are limited, and the bottom of the existing oil wells are in sight.