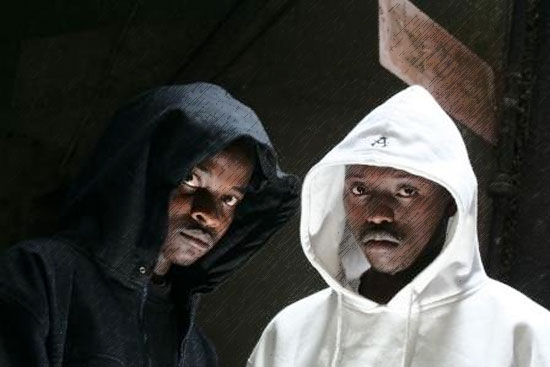 Live with Shenzy / Voice of the Underground (VOTU) is an urban radio show based on hip hop culture, hosted by MC Shenzy, a Nairobi, Kenya based hip hop activist/ mc/radio host and co-founder of the Rhyme FM website. In this latest episode of his show, MC Shenzy reports on his encounter with the new talents of 125 (One two five, named after the postal code of their neighbourhood Rongai). Listen to the show below.

Gaza, Chiz N Brain, Batata, Kdawg and MG: just to mention a few established emcees who graced the Live With Shenzy webcast in the past. Now to some new breed. I must confess though very few new emcees make it to my playlist, let alone the coveted killer interview.

Ladies and gentlemen, I take you to the future! This duo takes me back to days of legendary Kalamashaka classics Tafsiri and Ni Wakati, in other words timeless, conscious, tough, witty lyrics and the ill original flow and you got yourself classic records, well produced and you can tell from the hunger in their voice it’s from the soul. Just when i thought new mcs are leaning more towards battle side of the culture and forgetting the most important part, reppin for the people stuck in tyranny regime, poverty, police brutality, unemployment, tribalism, the youth, mothers, sisters, fathers and brothers. The true essence of hiphop and boom kwa face!!!

I met 125 (125th street). One thing that strikes you when you meet them is the laid back attitude, soft spoken peeps but ponder and you’ll know they got lots to say about the system, the people, the youth… the hip hop scene… you name it! You gotta give it to 125. These headz got hella skill, can write, the whole package fam and from “Live with Shenzy” A-PLUS mcs on mic, shelf life timeless… the lyrikal might is just too much. To y’all lazy so called legends and queens of shit gotta put yo thinkin’ caps on. Repackage yourselves or in a few you be nowhere in the scene… seen? Nuff said, amma let you catch the exclusive interview and you know where u heard em first: Live with Shenzy, this is what’s meant by havin’ your ears on street heard??!!! They are reppin for RONGAI na mats za huko ni 125… umenipata… gotten the ledge?

125 biography
125 is a conscious Kenyan Hip-Hop group that is striving to uplift Kenyan society through their soulful hip hop songs. The group is composed of two rappers: Dandan aka Babayao aka Falagan and Ray.

Dandan aka Babayao aka Falagan
Real Name: Dan Masika
What does he do besides music: Dan is a third year student at Kenya Polythenic University College studying Telecommunication and Engineering.
Career: Started writing lyrics in Primary. Formed a group in high school called “MASKWOTTA”, 2004 formed another group called “K-RO” that was based in Rongai. He has worked with Hirum & K-plan. Participated in K-2 talent search & Ibiza talent search a couple of years ago.
Influences: K-shaka (Vigeti/Johnny), Dead Prez, NAS, Mos Def, Talib Kweli, and Canibus
Likes: Listening to Hip-Hop, Beautiful women

Ray
Real Name: Ray Patrobas Nyamari
What does he do besides music: About to start a course in graphic designing. Previously did a course in IT but left half way through due to other interest.
Career: I started Rhyming in High school in form 3 but I had a very keen interest in music. He formed the group 125TH STREET together with Dan. Participated in Ibiza talent search and made it to the finals but unfortunately he didn’t clinch the prize. He has worked with Blue Zebra, Under Dawg, Ragz 2 Records, & K-plan studios.
Influences: Didge, Nas, Talib Kweli, Mos Def, Common, Jay-Z, Kanye West, Rakim, K-shaka, and mostly underground artists.
Likes: Hanging out with his boys, listening and writing Hip-Hop, Playing B-Ball, holain at fine honiez, watching movies and more.
Mission: To make real music that people can listen to anywhere, anytime
Vision
To create a positive vibe about Kenyan Hip-Hop, make people acknowledge & believe that Hip-Hop can uplift our society!
Label: Iconic Music Kenya