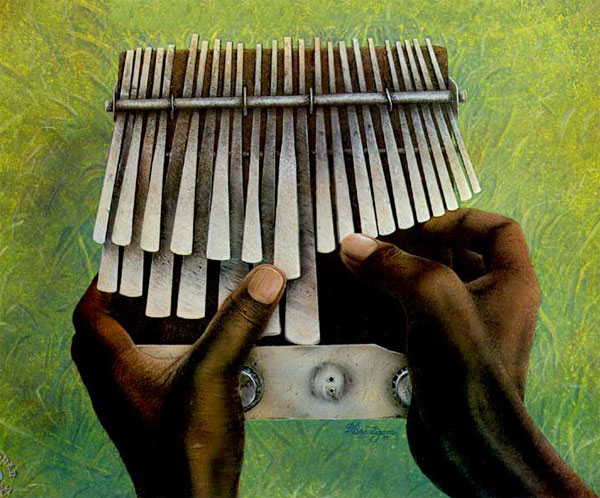 Little known to many of today’s African hip hop producers and other heads, percussion is not the only sound linked to the motherland that has been used on prominent productions throughout the history of hip hop and dance music. There’s an instrument people don’t know very well, with a unique sound, yet sometimes misidentified as a marimba or a snare instrument, an instrument featured on productions by everyone from Diamond D to Michael Jackson and Joe Zawinul Ensemble to Shabazz Palaces. The April 2013 edition of African hip hop radio is a tribute to the mbira, also known as thumb piano, sanza, likembe or kalimba.

[soundcloud]https://soundcloud.com/redlightradio/african-hip-hop-15-red-light[/soundcloud]
alert: the sound levels are a bit all over the place in the first 20 minutes! apologies

Usually made out of wood with tuned metal keys attached, the instrument from the lamellaphone classification is found throughout Central, Eastern and Southern Africa. It is often associated with Zimbabwean music as it plays an important role in Shona culture, the mbira is considered Zimbabwe’s national instrument. Thomas Mapfumo and his Hallelujah Chicken Run Band were among the first to introduce compositions made for the instrument in modern pop in Zimbabwe. In France, Cameroon-born artist Francis Bebey experimented with mbira and electronic music, as can be heard on the recent compilation of his best seventies work, ‘African electronic music 1976 – 1982’. Today there are numerous commercial releases available of groups and solo artists playing the mbira.

Since the early 70s, the mbira has also shown up occasionally in American jazz, funk and soul, where the instrument was often called kalimba. Maurice White, lead singer in funk/soul group Earth, Wind & Fire played one on several of the group’s best early albums including the tracks ‘Bad Tune‘, ‘Evil‘, ‘Kalimba Story‘ and ‘Biyo‘. There are several other rare grooves and classics which are carried by the soothing sound of mbira, such as ‘Travelin Man’ by Stanley Cowell.

The first uses of mbira in hip hop that we could find were in fact samples of the seventies classics by Earth Wind & Fire, Stanley Cowell and Heath Brothers utilized in productions from hip hop’s golden age, back when record labels would still afford to clear samples (or risk not clearing them). 1992 saw the release of Diamond D’s master piece ‘Stunts Blunts and Hip Hop’ with a song prominently featuring a mbira loop lifted from ‘Bad Tune’ which can be found on Earth, Wind & Fire’s first album. The same sample was also chopped up on ‘Act up’ by Ill Breed, found on the D&D All Stars compilation (2005).
‘One Love’ by Nas from his 1994 debut ‘Illmatic’ contained the banging ‘One Love’, produced by Q-Tip (not Large Pro as J4 suggests in the show) which is built around the mbira driven loop from Heath Brother’s ‘Smilin Billy Suite’ lifted from their top rare 1976 jazz funk album debut. And from then on, the ‘voice of the ancestors’ (‘mbira dza vadzimu‘ as the Shona call it) would resound every now and then in hip hop, r&b and dance productions.

Mbira samples were also included on keyboards such as the Korg M1, sold between 1988 and 1994 (listen here to the M1 mbira sound set). Michael Jackson’s ‘Liberian girl‘ uses a mbira-style keyboard sound (adding to the imaginary African soundscape along with the Swahili intro), heard again on MC Lyte’s ‘Keep on keepin on‘ which samples Jacko’s song. And remember Whitney Houston’s ‘It’s not right but it’s ok’? Listen again.

It’s clear that the sound of the mbira has made its mark in hip hop and soul history, but are African-origin sounds being used by today’s hip hop producers in Africa? Occasionally, yet the balance between beats sounding like carbon copies of what is hot in Atlanta or New York and those with a local touch is still way off, as far as we are concerned. When it comes to mbira, we should mention the work of Zimbabwean producer Begotten Sun who’s also heard on last year’s ‘Synik City‘ mixtape – the mbira plays the lead role in many of his beats. And of course there’s US based group Shabazz Palaces consisting of Ishmael Butler (ex Digable Planets) and Tendai ‘Baba’ Maraire, whose father is a famed musician who played an important role in introducing the mbira in the USA in the 1970s and whose sister Chiwoniso was part of Zimbabwe’s first rap group Peace of Ebony. Tendai, who started his musical career as a kid, is a rapper but is also a skilled mbira player. On several Shabazz Palaces tracks he combines both talents. After listening to this month’s African hip hop radio show make sure you check out Chief Boima’s mbira-fueled promo mixtape for Tendai’s latest album ‘Pungwe’ released under the name Chimurenga Renaissance.