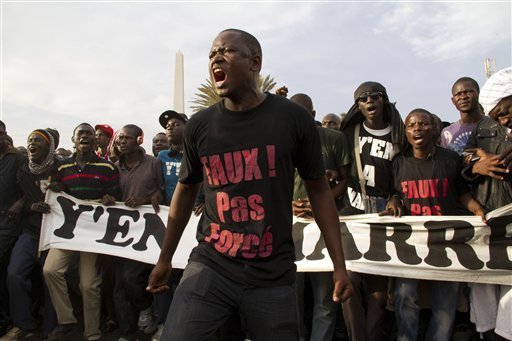 In the first African hip hop radio show of 2012, and less than a week before Africanhiphop.com’s 15th anniversary online, dj Threesixty and presenters Amal & J4 go back to the essence of hip hop culture: the role it has played and continues to play in social & political change. The events leading up to Senegal’s general elections, which will take place on February 26, and police response to unrest among urban youth (violent clashes leaving four dead), have had a big impact on the hip hop scene in the country.

Protests from within the hip hop scene are centered around the Y’en a Marre movement (also see this post by NY Times) but awareness is widespread, and very few people will not have an opinion on whether sitting president Wade (85 years old) should have the right to go for a third term. In the second hour, Amal & J4 speak on the phone with Amadou Fall Ba from Africulturban, an organization that produces the annual H2A hip hop festival and is involved in social projects in the banlieux (the hoods) of Dakar. Amadou reports on the situation on the streets on Dakar, explains what happened to rapper Daddy Bibson (ex Rapadio) and Gaston (who was attacked for allegedly not supporting Y’en a Marre), and gives his opinion on whether there’s freedom of speech in Senegal at the moment.

Lots of new music this month from the likes of Youssoupha (France/DR Congo) who did a track featuring his father, the famous Congolese singer Tabu Ley Rochereau; a new album by Kenyan veteran emcee Judge with production by Mandugu Digital, a world premier by KMS from DR Congo and an old school joint by Positive Black Soul, their first official release ‘Bagn Bagn Beug’ which came out on a compilation in 1992.

Last track in the second hour is another exclusive, a track from Zanzibar (Tanzania) which was banned from local radio and television, and the artist, a rapper called YB, was even told by the government to stop making music at all. The reason: in this song, called SMZ (Serikali ya Mapinduzi ya Zanzibar), he criticizes local politicians for not doing their jobs and holds them responsible for the suffering and deaths of his countrymen. According to the government, he disrespected the island’s leaders, in particular with the lyrics ‘Zanzibar kuna kikundi cha wahuni, hakuna serikali’ (In Zanzibar there’s a group of thugs, there’s no government).