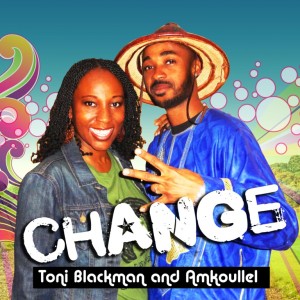 USA’s hip hop ambassador Toni Blackman‘s travels as a lyricist have called her to the continent many times – you may remember her from her report on 2010 World Aids Day in Botswana. Toni has sought to do collaborations in every country where she has landed. She has recently recorded with Yoro Ndiaye in Senegal, Tumi and Zubz in South Africa, Noccdyl and Nash in Ivory Coast, and the list goes on.

Her Brooklyn-based engineer/producers Fritz Francois and Troy Sampson out of Haiti were open to the idea of bringing in Malinese rapper Amkoullel to rock a track with her on his last U.S. tour. They came up with CHANGE, a song of encouragement and a rallying cry in Bambara, French and English to set off 2012. Both Amkoullel and Toni have new projects being released this year.

Amkoullel ‘l’enfant Peul’ (the Peul child) is recognised as a socially committed Malian rapper, combining traditional and contemporary global cultures to promote social responsibility. He is a cultural and social entrepreneur, a TV presenter, a producer, video director and actor.

Stream or download the song as a free gift for a limited time here:

And here’s a Amkoullel video of the song ‘Kalan’: