The groundbreaking SHOKO! Festival in Zimbabwe

The Shoko International Spoken Word & Hip Hop Festival is a celebration of poetry, hip hop and urban culture that strives for positive social change and democracy that was organized by the Magamba Cultural Activist Network (Check out the short video on the organization.). Broadcast from Harare, Zimbabwe, from the 21st – 24th September, the inaugural Shoko Festival included live concerts, an artists’ debate, an international poetry slam, film screenings, live recordings, live graffiti and a cultural activist conference. The festival brought together acts from 8 different countries including headline acts such as Akala (UK), Tumi & the Volume (SA), Hired Gun (USA) and Andreattah Chuma (Botswana). 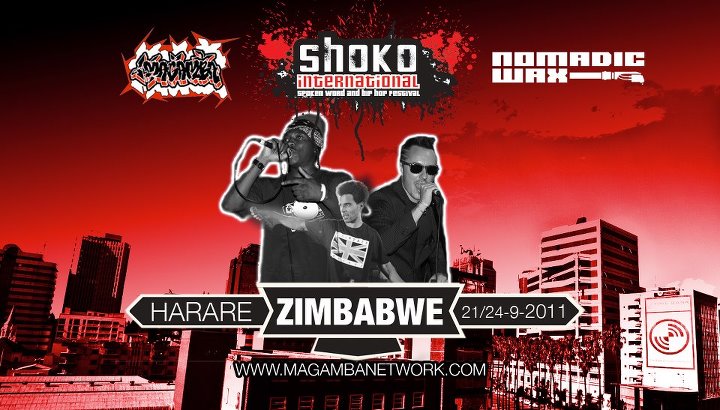 Over 1,200 people visited Shoko during the four day period that included over 50 performances and 15 workshops/seminars. In the prevailing climate of fear in Zimbabwe, the Shoko Festival proved to be unique in its use of urban culture for social change and democratization. Through the debates, workshops, conferences and concerts Shoko created a free space for open democratic debate while also encouraging a new generation of spoken word and hip hop artists.

The exclusive Shoko! documentary short showcases the best of the festival including the concerts, workshops, talks, poetry slams, graffiti, breakdancing and more. There areal so interviews with the organizers and artists involved that reveal why such an event is key in contributing to the development of the arts and how it opens democratic space.

Magamba and Nomadic Wax are also proud to release – for the first time in the history of festivals in Zimbabwe – stand alone videos of all the live performances, workshops, conferences and talks. The Shoko! festival experience is now available to everyone as one can watch online the performance by an individual artist or click on a specific workshop video and watch it unfold. This is part of a project to document the living history of arts and culture in Zimbabwe while also spreading the education and skills-sharing from the festival further afield. This will also help in marketing the festival abroad while at the same time it greatly assists performing artists as each artist now has a professionally edited video of their concert that can be used for promoting their works. Watch it here.

The official Shoko! Documentary short as well as the stand alone videos of the performances, workshops, conferences and talks can be found here: http://vimeopro.com/nomadicwax/shoko