We have to admit, we love the sound of the mbira (thumb piano, also known as likembe or sanza). All the way from hearing it live to checking out the albums of Cameroonian Francis Bebey or Herbie Hancock in his funky, Afrocentric seventies outfit Headhunters (it was actually his bass player Paul Jackson who introduced the instrument) to Nas’ Illmatic album sampling the Heath Brothers, today we stumbled upon a new ode to the greatest African musical instrument ever made. 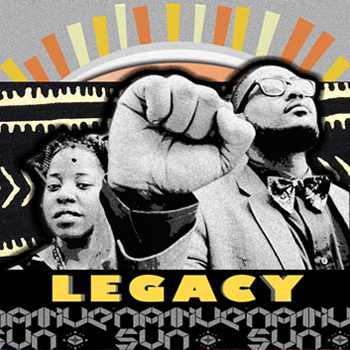 Native Sun is a collabo between Mohammed Yahya (Mozambique/UK, ex Blind Alphabetz) and Sarina Leah (British born with roots in the Caribbean). Their first work together will be released on February 20 but you can already get it from their Bandcamp page. The single ‘Legacy’ with its groove driven by a clean mbira sample comes with a great video by Global Faction and indeed Herbie Hancock is one of the heroes portrayed in the graphics. Mohammed is heard rapping in Portuguese as well as English.

No doubt we’ll be hearing more about Native Sun this year, they already have a booking at SXSW festival (March in Texas) and some gigs in the USA confirmed.