This month, Amsterdam’s Metro54 festival teams up with Africanhiphop.com in Boom Africa, a recording and performing project bringing together four major names from the African and diaspora hip hop and dance scenes. Baloji, Kalaf, Gery Mendes (GMB) and Okmalumkoolkat will join in Amsterdam’s Red Bull studio to compose new tracks, record an EP and prepare a joint performance at Metro54 festival on September 1st, 2012. None of them have worked together before, and we can only imagine what the outcome of putting these musical innovators together will sound like – ‘Afropolitan mash-up’ anyone?

Kalaf is a poet, writer and musician from Lissabon (Portugal) with roots in Angola. He’s known as the brains behind Buraka Som Sistema, the band that first introduced kuduro to western stages. At Metro54 he’s also guest curator behind the Kuduro Lisboa program.

Gery Mendes (also known as GMB) is an emcee, producer, actor and poet born in Rotterdam with roots in Cape Verde. He is also known from African hip hop radio which he hosted with J4 and Threesixty at FunX until last year.

Baloji was born in eastern Congo and moved to Belgium at a young age. He made name as a member of legendary hip hop crew Starflam, and five years ago he embarked on a solo carreer in which he has focused on his roots in Congo. He’s been touring the world with a live band (including last year’s Doin’ it in the Park) and his latest album Kinshasa Succursale was received to much critical acclaim.

The Boom Africa recording sessions are not open to the public, but the tracks will be available afterwards, and the artists will perform their new work on 1st September from 21:30 – 22:15  at Metro54, Amsterdam’s youngest festival which takes place in Zuidoost, the neighbourhood with the biggest African diaspora population of Amsterdam. 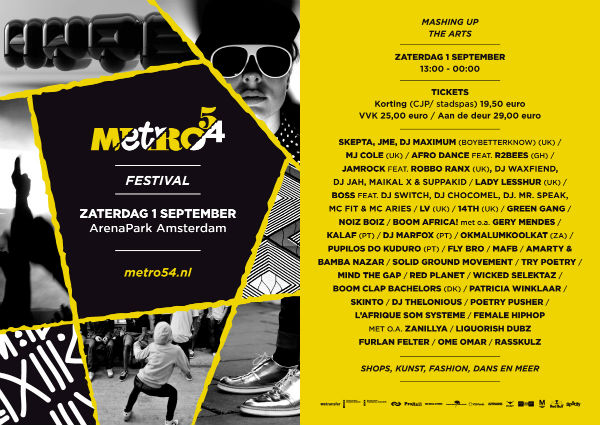 Other performances of interest at Metro54 include Kuduro Lisboa with DJ Marfox (Portugal),  Pupilos do Kuduro (Portugal), Nastio Mosquito (Angola) and Orfeu Collective (Portugal). From Ghana, hiplife group R2Bees will perform with the Afrodance deejays; Bamba Nazar (dj Threesixty) presents a collabo with Ghanaian-Dutch artist Amartey and dj team L’Afrique Som Systeme will present their global mashup skills. Click here for the rest of the impressive line-up that will invade the Amsterdam Arena park from 13 hrs until midnight.

Keep an eye on the Metro54 website, join the event page on Facebook and meet us there on the 1st of September.