“Home is that peace of mind, the rays of sunshine / will go to war with any anybody trying to take mine.” –StaHHr

Ever-pushing boundaries within the hip hop mixtape tradition, Nomadic Wax has partnered with NYC-based storytelling project Housing is a Human Right, in the creation of an original mixtape project entitled HOME, by DJ Boo.

DJ Boo, a veteran of the New York hip hop community, brings the tradition of hip hop mixtapes and turntablism to a project focused not just on music, but on the creation of an entire sonic dialogue around the concept of home, and the idea that housing should be a global human right. With slick production from the DC-based political hip hop heavyweights the Cornel West theory, the project features original verses and songs from artists all over the world, including Gabon, Zimbabwe, the UK, Cape Verde, Haiti, Zambia, Senegal, South Africa, and more.

“Wherever we go, we hear the same story again and again. Insecurity. Uncertainty. But people getting organized.” said Michael Premo of Housing is a Human Right. “The global uprisings that have erupted in the last few years signal a growing global consensus that a change must come and we are constantly looking for creative ways to share stories that reflect this new reality. We have worked with DJ’s playing audio stories in Laundromats and vacant storefronts, and so doing a mixtape just made sense. There is no better way than through the universal language of music to express that the problems we face, while they vary in scale and intensity by region, affect people around the world in profound ways.” 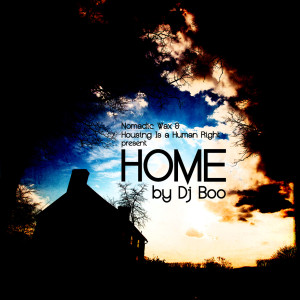 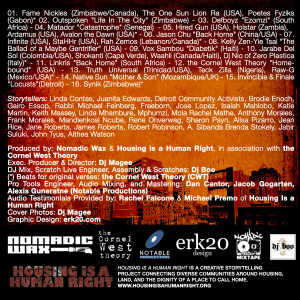 First-person testimonies recorded in the US and South Africa by Housing is a Human Right through the organization’s years of storytelling work and on-the-ground organizing are woven together with the renowned voices from the international hip-hop community.

“I’m constantly reminded of the power of words and how it brings to life oral traditions,” said DJ Boo. “For us, those traditions and that power is continued and honed through hip hop. People from around the world have taken this artform and made it their own, using it to tell their own stories. So when we were approached to do this project with Housing is a Human Right, I felt that it was a perfect match- a project that would help everyday people tell their stories while at the same time give artists a platform to express their feelings on the subject of housing and how it affects their communities as well. This project epitomizes how I feel about this artform and how it can be used to inform, unite and uplift.”
Through mixing the raw emotion of real life moments with the intricately sculpted verses of the different emcees, the result is a unique compilation of perspectives, thoughts, and opinions aiming to establish a voice in the global struggle for housing.

The mixtape will be available to the public online for free download at http://nomadicwax.bandcamp.com/track/home-housing-is-a-human-right on August 15.

8. Kelly Zen-Yie Tsai (USA): “The Balled of a Maybe Gentrifier”