Hali Halisi: a documentary from 1999 on hip hop in Tanzania 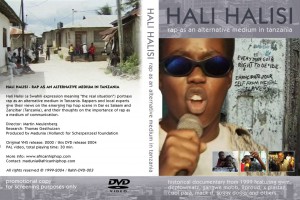 Hali Halisi was shot in 1999 and released in 2000 by Madunia foundation (at the time, our organization which ran Africanhiphop.com). It was the first documentary to speak about the way in which African hip hop artists spread awareness on issues in their communities. The influence the film has had on policy makers, journalists and other film makers should not be underestimated. In 2004, Hali Halisi won the ‘Best short documentary’ award at the H2O International Hip Hop film festival in New York

Hali Halisi (a Swahili expression meaning “the real situation”) portrays rap as an alternative medium in Tanzania. Rappers and experts give their views on the emerging hip hop scenes of Dar es Salaam and the island of Zanzibar, and their thoughts on the importance of rap as a medium for communication and an instrument of change. The film centers around the most popular emcees at the time, including Mr II (Sugu), Deplowmatz, Gangwe Mobb, GWM, X Plastaz and Bantu Pound.

Read more about the documentary here and watch the Youtube video on top of this page.