Fore: Going back is not the same as staying 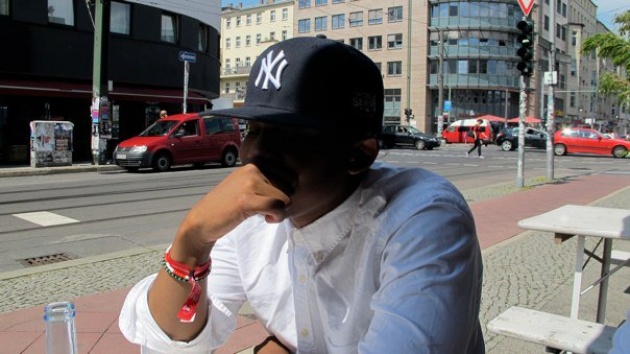 I’m shooting the breeze with Fore (Mutaurwa Mapondera), a confident and artistically ambitious young Zimbabwean emcee, and as he talks about why he had to leave New York I’m reminded of the Congolese emcee Alec Lomami, who also had to leave the States after 14 years, and I imagine the hundreds of thousands of others who have also had to leave the places they’ve come to know as home because of the lottery of ‘place of birth’, the arbitrary thing that determines how much freedom of movement and which rights of residence you will be allowed on this planet.

But Fore knows the score, he studied International Politics and History. Make allowances for people like him when the economy is booming and when the economy goes through the downward phase of the cycle, the recently unemployed looking for someone to blame will turn on their government and scream, “you let all these foreigners in and they took all our jobs”, though “all these foreigners” never amounts to more than a tiny fraction of the working population.

Knowing the score reduces the frustration, but doesn’t rid you of it entirely. How could it? You just wanna get on with your life somewhere but you can’t. You get through interviews but when you mention the fact that you’re not American they show you the door because, hey, who wants to pay an additional $10,000 for the benefit of your services (that’s how much it costs an American company to sponsor, i.e. hire, a non-American). You wanna work, but the odds of finding a willing sponsor are slim, and you’ve got the threat of being nabbed by immigration police hanging over you all the time. But as he says later during our chat, if you follow your passion success follows you, and his passion is hip-hop, his goal, to become the best rapper in the game.

Going Back is Not the Same as Staying, his new mixtape, is his first real demonstration of where he’s at right now as an emcee and producer.

Fore had released a couple of tracks in the fortnight before we met, and my attention had been caught by C’est Pas Bon, which samples the Amadou & Mariam track Ce n’est pas bon. It was enough to make me wanna hear more. Fortunately was in the Netherlands, so we arranged to meet before he left for the UK.

He describes Going Back is Not the Same as Staying as a labour of love and a snapshot of the last 5 years of his life, but his mum was a diplomat so he’s been a nomad for much longer, and when you hear about his background you understand why he feels more like New Yorker the anything else.

He was born in Belgium and lived there till he was four, moved to Zimbabwe for a year before moving to Botswana when he was 6. Then to India when he was 12, finished off high school in Germany before moving to the States for uni, where he stayed for longer than he’s stayed anywhere else. New York, he says, is where he came into his own as a man. It’s the only place he’s ever lived where everybody assumed he was from there. I’m not surprised; he sounds like nothing but a New Yorker. Zimbabwe is home because his family and culture are there, but he didn’t grow up there and doesn’t speak Shona, so he’s always going to feel a little bit out of place. It’s not where he had the high-school social life experience, the sort of things that result in the memories that bind you to a place.

At the same time, he says, he experiences the guilt of not being in a position to do for Zimbabwe what’s expected of him. Zimbabwe is a young country; it only got its independence and sovereignty in 1980, so he is part of the first generation to be born free, something he talks about on the track Insomnia. Given the privilege of the sort of education he’s had, you’re imbued with a sense of responsibility: study hard, get a job and come back and work for the greater good of the country. But it’s hard for a generation that fought and died for the next generation to have such privileges to understand that while you may want to do so, the circumstance in which you find yourself sometimes means you simply don’t have the resources or ability to do it right there and then. This is what he’s referring to on Stars Are Born when he says “My parent’s generation barking up the wrong tree…”

He was in Zimbabwe in 2007 after uni, but the country was then in the depths of an economic crisis and everyone just wanted to leave. It’s a different place now; when he visited a few months ago, people told him they couldn’t see themselves leaving Zimbabwe. People feel they have a stake in the country and can make a life for themselves there, even if the infrastructure is still shaky. but while the desperation has decreased, you still need to be willing to take advantage of other people to be comfortable, he says, so maybe later.

Listen: Stars Are Born
[audio:http://content.omroep.nl/ghettoradio/musicblog/fore_stars_are_born.mp3]
The theme that runs through Going Back is Not the Same as Staying is distance, the effect that distance can have on relationships and perceptions. He can always go back to Zimbabwe, for instance, but his understanding and acceptance of the place will never be the same as it would have been if he’d lived there all his life. And even New York isn’t standing still while he’s away; life moves on, you notice it when you return and there’s some distance. But the main thing is to follow your passion. If he continues to do that, he says, he’ll be fine. So we talk about that.

When you look at how people have been talking about Drake being from Canada, says Fore, you realise the degree to which non-American acts are not taken as seriously as Americans on an international level. Thus one of his goals is to show that an African or Zimbabwean artist can be as good as anyone in the game.

So which African hip-hop artists does he rate? Wale (of Nigerian descent) and K’naan (Somalia) are dope, he says. Wale is special and important because being “the African rapper” isn’t his thing, but being African is central to his identity, and that’s a progressive way of being. But as am emcee, he says, he’s always going to be competitive, so as an African emcee you really have to come hard for him to take notice, which happened recently when he heard a couple of joints from Esau Mwamwaya (of The Very Best).

He wants to get the music out there and show what he can do as a songwriter and producer, although as someone with professional experience in marketing he knows that at the end of the day people will make up their own minds about his abilities. Still, as an artist who takes the art of rapping seriously, this is a project he’s proud of. I rapped my ass off on Departure and The Train, he says excitedly, but it’s not rapping for the sake of rapping; there are still stories in there. That’s why Jay-Z is the greatest of all time; he consistently maintains a high level of technical skill with very rich concepts. You have guys with a lot of technical skill who will rap circles around everybody, but if you listen to the lyrics they’re not telling you anything or taking you anywhere. Then you have other guys who are good songwriters but they’re not gone surprise you with metaphors or rhyme schemes; they’re not gonna do anything technically exciting.

Listen: The Train
[audio:http://content.omroep.nl/ghettoradio/musicblog/fore_the_train.mp3]
That first verse on The Train is one of my proudest as a craftsman, says Fore. The storytelling is there, the setting, the concept is strong and the rapping is at a very high level. It’s very dense, and that’s where I want a go. I respect the craft of emceeing, I study the craft and always wanna be telling a story. Next project is going to be focussed more on songwriting. The one after that, which will be out at the end of the year or early next year, is going to be about Africa.

Going Back is Not the Same as Staying is out on the 6th of March.
Promo site HERE.

This story was first published on Thisisafrica.me – February 2012