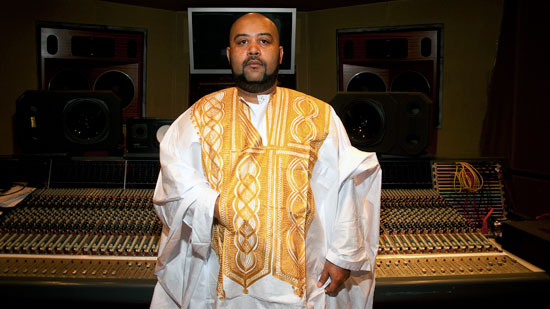 In the past few years as the hip hop movement in many African countries grew big enough for the world to notice, there has been one question that popped up every once in a while. ‘Do you think an African hip hop artist could make it big in the USA’? And while there are some high profile diaspora-raised artists (think Wale, K’naan, Akon), there’s a long way to go for mainstream America to really accept artists from Africa. When we first heard of the latest project by Ghanaian-born producer Coptic, we had to think that his approach might go a long way in achieving this.

Coptic, who grew up in Accra and Awukugua (Ghana), came to the USA in 1983 at the age of 13. Having set his first steps into music while living in Accra, he became professionally involved in hip hop around 1997 with productions for Puff Daddy and his Bad Boy label, producing ‘If I Should Die Before I Wake’ by Notorious BIG and ‘I need a girl’ by Pdiddy among many other achievements. Most recently, a beat by Coptic was heard on the joint effort by KRS One & Buckshot, ‘Survival skills’.

His new project, ‘Black Star Line: Close to my roots’ is an effort to unite American and African emcees on one album over Coptic’s beats. Opting to work with only seasoned and respected names in American hip hop, such as M1 (Dead Prez), Smif n Wessun, Black Rob, Havoc (Mobb Deep), Sheek Louch (The Lox), Buckshot and Memphis Bleek, the project seems assured of the deserved attention when it drops. African artists on the album include Zimbabwe Legit, Abbas Abbas, Gibril da African and jazz legend Hugh Masekela. Coptic teamed up with Africanhiphop.com to connect with more names including Salah Edin, Arabian Knightz, and X Plastaz.

While more and more American artists make the important step of visiting the motherland either for doing shows or for holidays, many hip hop artists have never visited Africa yet, and Coptic’s project could help change that. So far, the response has been positive. Tek from Smif ‘n Wessun: ‘It is an honour and pleasure to be involved in this project with artist from Africa. It is something different for us, plus we get to work wit our big homie Coptic again. We are all hoping that this album would bring the worlds even closer together. Music builds and destroys, so once you tear down and eliminate all the negative, you can rebuild with positive energy’.

Time to sit down with Coptic for a short Q&A.

How do you keep yourself updated about what is happening on the continent? Did you have to go to Ghana to realize how big hiplife and hip hop have become?
It’s not difficult to know whats going on in any corner of the earth that has internet access. I can listen to Ghana radio online, watch the newest artist’s video on Youtube and communicate with them on Facebook. So if you have the time to pay attention, the info is available.

What do you think caused the renewed interest in music and culture coming out of Africa in recent years? Is it merely a temporary interest like the afrocentric movement in hip hop in the late eighties, or are we in for a more permanent connection?
There is definite renewed interest in African music and culture and I don’t think its as simple as the movement in 80’s hip hop when everyone including myself  was wearing black medallions and no gold. This is a movement coming from the continent itself due to the amount of talent that exists there. For it to be permanent, the continent needs to support and embrace its artists a bit more on the business end. African artists and producers need to be paid their radio/video/internet and mechanical royalties just as any other artist in the rest of the world, if you don’t respect your own, why will anyone else? Most African producers that I know do it for the “props”, because there is no payment for their work. The label owners and media heads are using the artists/producers intellectual property to line their pockets. Some may say “hey, that’s how Africa runs”, well that is an easy way to keep the artists from competing internationally.

What are the most important things that American artists bring to the table in the Black Star Line project?
Well, I thing that they bring what we call in America the “co-sign”. Meaning that if Memphis Bleek is on a record with Abass Abass from Senegal or if Havoc (Mobb Depp) is on a joint with Eddie Atlas from Uganda, maybe it’s worth listening to because you know Bleek is dope, you know Havoc is dope, so Abass and Atlas must be dope as well. The American rappers give the project a chance to succeed in America as far as sales and reach. I want Americans to know that real hip hop lives in Africa, perhaps even more than in America. Some reading this might say “yeah right”, but I know 5 year old rappers from Uganda that love hip hop and spit like their life depended on it. Big up to my dudes Mc Hope and his ship crew spitting that Luga flow.

The Black Star Line project, which so far has been developed independently by Coptic, is still under development with more artists and recordings being added as we speak. Coptic is also interested to connect with potential labels or distributors to help with the album’s release. You can join him via the project site which will be online later this month, or find him on Faceboook (search for Coptic Sounds or The Black Star Line).