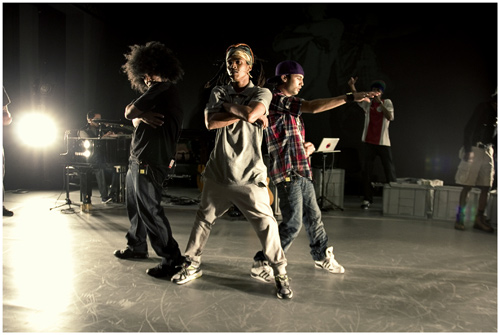 Our favorite destination in the Netherlands in the coming week is the theatre as the Afrikaaps ‘hip hopera’ is touring different cities. The cast is made up of heavyweights in South African hip hop: Jitsvinger, Blaq Pearl, Bliksemstraal, Moenier Adams, Jethro Louw, Emile Jansen, Kyle Shepherd and Shane Cooper. If you have been following this site for a few years you will know some of their names – Emile is one of the originators of hip hop culture in SA, Jitsvinger is among the most respected Afrikaans language emcees, Blaq Pearl is a young female poet who is also the sister of the late & great emcee Devious, and so on.

Afrikaaps is a play (or indeed, hip hopera as it is being called) about the history of the Afrikaans language in South Africa. While many people abroad associate the language with the white population, Afrikaans in fact grew as a creole language to bridge between all the different inhabitants of Cape Town at the time: Khoi San people, European settlers and the slaves they imported.
Nowadays a variety of Afrikaans (you could say: Afrikaaps) is widely spoken among their descendants, and the version you hear on the Cape Flats (former townships) is quite different from how the news anchor sounds.

The hip hopera combines music, poetry and rap with documentary video and interviews. To make the connection with a Dutch audience, director Catherine Henegan added Dutch rappers Def P and Akwasi to the cast. The key dialogues have been translated so nobody should feel lost while watching.

There’s a documentary about the creation of the play and the first performances in South Africa. The 52-minute film, also titled ‘Afrikaaps’, was directed by Cape Town born Dylan Valley. On 8 and 13 October the doccie will be shown as part of the Africa in the Picture film festival in Amsterdam and the Hague. On 8 October there’s an afterparty in MC (Amsterdam) in association with Africanhiphop.com where the Afrikaaps cast and invited emcees will perform spoken word pieces.